Can I forgive sharp teeth? 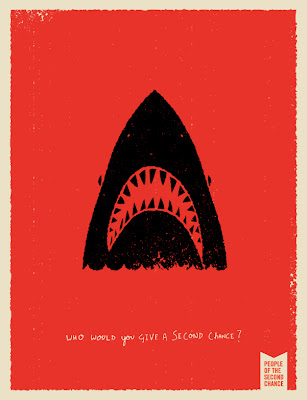 This weeks poster is a familiar movie monster.  I like what People of the Second Chance had to say:


So what do you believe? Do you have a shark in your life? Have you forgiven them?

I had to think for a bit to remember the "jaws" in my life.  This lack of immediate memory helps me see how far I have come from the shock, pain and trauma.

I was thirty years old and seven years into a job at a major university.  I had started as an hourly paid accounting clerk, receiving praise and promotions on a regular basis.  Whatever work was thrown at me I handled with skill and accuracy, until I found myself moved into a salaried, more professional position as an admistrative assistant and office manager.  I believed that I had good relationships with those who worked for me as well as those I reported to.  The work was surely less than exciting, but the pay continued to increase.  I put my time in while filling my nights and weekends with friends, drinks, music and other less than positive habits.

I had just been notified of another promotion and raise when I found myself summoned to the director's office.  Seated around the desk were the director and assistant director of personnel for the entire university.  I assumed the meeting was about an issue with one of my staff members.  I felt a sudden and intense flush of heat overcome me as I listened to voices informing me that I was being put on suspension for an unknown period of time while they began to investigate a claim of sexual harrassment filed by a male employee who had quit a month prior.  Not only was this totally untrue, but when he had quit he said he didn't really want to leave, but he had found a better paying job. I was told to leave immediately and not to make contact with anyone I worked with.  The shark had bit, I left bleeding.

The days ahead included tears, anxiety and confusion.  I actually believe the charges were fabricated as an excuse to force me into resigning.  I never really knew what happened, and unless God chooses to reveal the scenario to me, I will never know.  Life had to move on.

Years later, after circumstances that led to my encounter and surrender to Jesus I have come to realize that God used the situation to shake up my life in ways I never would have done on my own.  I have been able to truly forgive all those involved, in much the same way that Joseph forgave his brothers:

Don't you see, you planned evil against me but God used those same plans for my good, as you see all around you right now—life for many people
Genesis 50:20 The Message

The sharks, like all God's creatures are never beyond forgiveness.

Visit People of the Second Chance to read more about Jaws

Powerfully written post, I'm so sorry you had that happen to you and yet the blessings that came from it certainly soothe the ache of the scars from the shark bites. Well done.

Wow! I guess when you read my post you totally understood what I was saying about my husband's integrity called into question. I can't imagine going through this personally, but my heart certainly feels for that kind of pain. Thanks for the post!

It's easier to look back, after one's been delivered from famine, and see how God was working for good. Faith is the substance of stuff that looks forward, from the point of pain, believing that He has yet to do that, and still forgiving.

Your words challenge me, Karin. Forgiveness is reality. But sustaining faith—and hope—in all that good yet to come is what puts teeth into the forgiveness, I think ...